Before I started traveling to Asia, when someone would ask me if there were something I didn’t eat, I would just answer “seafood.” After spending almost two years in South East Asia and gorging on street food and local delicacies, I realized there were many more things I didn’t eat, and the list kept growing along my trip.

I usually do a lot of Couchsurfing Staying at people’s homes, I had the chance to try authentic local dishes. The thing is, you cannot really say no to food in Asia, and if you don’t ask for more, they’ll think you didn’t like it. While it’s often delicious, it came sometimes be difficult if you’re used to a Western diet. Here’s a list of the strangest food I had while in Asia.

All opinions are based on my taste buds, and I’m grateful to all the people who shared a meal with me, whether I liked the meal or not.

I got trapped two times with this one. I know it’s common in many countries to eat the liver and the kidney, but come on all the organs?

The first time was in Indonesia, I had met a local via Couchsurfing, and we went out for lunch. He asks me if I like beef and if I want to try a local dish, so I said yes, of course. We get to the eatery, he orders for me, and then a bowl of soup arrives. There’s not much light, but I still can see some weird things floating in the soup, weird things that don’t look like meat at all. Then I see it, a piece of intestine! So I’m asking the guy, and he’s like, oh yes, it’s organ soup, there’s liver, lung, heart, intestine, everything. I thought, well, if people eat it, I should at least try no? I tried the lung, and it was as far as I could get. Apart from the organs, the soup was good though.

This is common in Asia: when you order pork, two-third of it is fat, and people love it. I’m usually not a picky eater, but just the texture of it in my mouth makes me want to vomit. I don’t understand how anyone can eat so much of it. You don’t even get a knife, so it’s super hard to take the fat out of the meat while being discreet about it.

One day, in Indonesia, I ordered soup, and they often put chips in it (don’t ask me why). So I thought the thing floating in my soup was a chip, well it wasn’t, and it was already in my mouth when I realized it was pork fat. Thankfully we were at the restaurant, so I was able to spit it out without offending anyone.

I’ve put the two together because I tried them during the same meal. Both are Filipino delicacies found everywhere in the country. I think locals like it because they add tons of spices to it, so you don’t really feel the original taste.

I was pretty reluctant to try it, but it was my first night in Manila, and I felt pretty brave that day. I spent the night regretting my decision…

Chicken intestine is a pretty straightforward dish, they take the intestine, clean it, dip it in sauce and twirl it on a stick before barbecuing it. For the blood kebab, they use pork blood. I don’t know how they thicken it, it kind of looks like liver. They also make soup with the blood, it looks as bad as it sounds.

Both are neither good or bad, it’s just the texture that makes it disgusting (to me), it’s something you have to get used to. It’s chewy and soft at the time, it’s hard to describe really.

While in Borneo, I discovered that flowers are part of the local diet, they make tons of different dishes with them, usually salads. It’s surprisingly good and full of nutrients. Papaya flowers help prevent malaria, and the banana tree flowers can be prepared in tons of different ways.

As for the leaves, it’s common across Asia, some are good, some are tasteless, and some are just bad. I remember one day, I was staying in a guesthouse in Timor Leste, the owner offered me food saying the leaves grew behind his house. Let’s just say, it’s a good thing he brought the plate to me on the beach and didn’t stay with me. The rest of the dish was good, but the leaves were hard to finish. I ended up burying them in the sand.

Sarabba is a hot drink made of ginger, palm sugar and coconut milk from Sulawesi in Indonesia and it’s the weirdest drink I’ve ever tried. I had read about beforehand and wanted to try it. I ended up waiting for a bus for hours in a small-town bus station, and there was an old lady selling drinks and snacks there. When she saw me, she called me over and showed me this strange mixture, telling me to try it. I didn’t know it was Sarabba, I actually had no idea what it was, especially as she didn’t speak English. But I thought why not, and asked for a cup of it.

RELATED POST
Bako National Park - Everything you need to know

My first impression was that it looked more like a sauce than a drink. It’s thick and creamy, and when you taste it, you feel the spicy taste of ginger mixed with tons of sugar. To me, you make it without sugar, and you have a great sauce. It wasn’t bad, I drank it again after, but it’s just so weird, the texture and the mix of flavors.

What better thing to add to your coffee than egg whites? Anything but egg you say? That because you haven’t tried it yet. Some cafés in Hanoi, Vietnam, had the great idea to try to combine coffee and egg white a while ago, it created a small buzz and is now a must-try if you ever find yourself in the Vietnamese capital.

I, of course, had to try it so I can tell you all about it now. The thing is with coffee in Vietnam, is that it’s amazing. I will always remember my first cup of coffee there. It’s so delicious that you can pretty much add anything to it and it would still taste okay.

Back to the egg coffee, you can’t really taste the egg, it just gives the coffee a thicker texture. It’s weird when you know what you’re drinking, but the taste is good. I wouldn’t go as far as to say that it’s a great drink. Coffee still tastes better without eggs in it, but it’s a funny thing to try.

7 – Barbecued Banana with chocolate and cheese

Sounds great no? Everyone knows how chocolate tastes better when eaten with cheese, no? This one I had in Indonesia, once again I got “tricked” by a local asking me if I wanted to eat a barbecued banana, without telling me about the cheese, and me, all innocence, not thinking someone could add cheese on a banana.

Century eggs aren’t exactly weird once you’ve tried them, just the look of them is. Century eggs are fermented eggs. Boiled eggs are kept in a clay mix for a couple of months until they turn black. It’s actually good when well seasoned, I had mine in Malaysia, dipped in a ginger soy sauce, and it was pretty good.

Eating goat is not weird, but the story is funny, so I thought I would put it there. One day in Laos, my bike broke down in the middle of nowhere in a small village, no electricity, no running water, remote. I ended up being invited to dinner by one of the villagers. We sat down on the floor, there were sticky rice, two vegetable dishes, and one unidentified meat dish.

What you have to know about Laos is that they eat every kind of meat possible (dog, rats, all types of rodents…), if it got a heartbeat they eat it. So I was a bit worried about this meat dish. The lady soon realized I hadn’t touched the meat yet so she insisted I tried, No one spoke English there so I couldn’t even lie about being a vegetarian to avoid eating the meat.

The pieces were huge and looked really dry and not enticing at all. I didn’t want to offend her, and she was really insisting. So I grabbed one piece and put it in my mouth while she was watching me. I start chewing on it, and I realized it’s goat meat (thinking about it now, it doesn’t really make sense because I had never had goat before, so it really could have been anything). Anyhow, I also soon realize, the meat was so hard it was impossible to chew it. So I’m seating there with this huge piece of meat in my mouth, I don’t know what to do, and then the cat comes to my rescue. I waited for the lady to look the other way and gave the cat the meat, which he managed to chew better than me,

What about you? What’s the strangest food you have ever eaten? 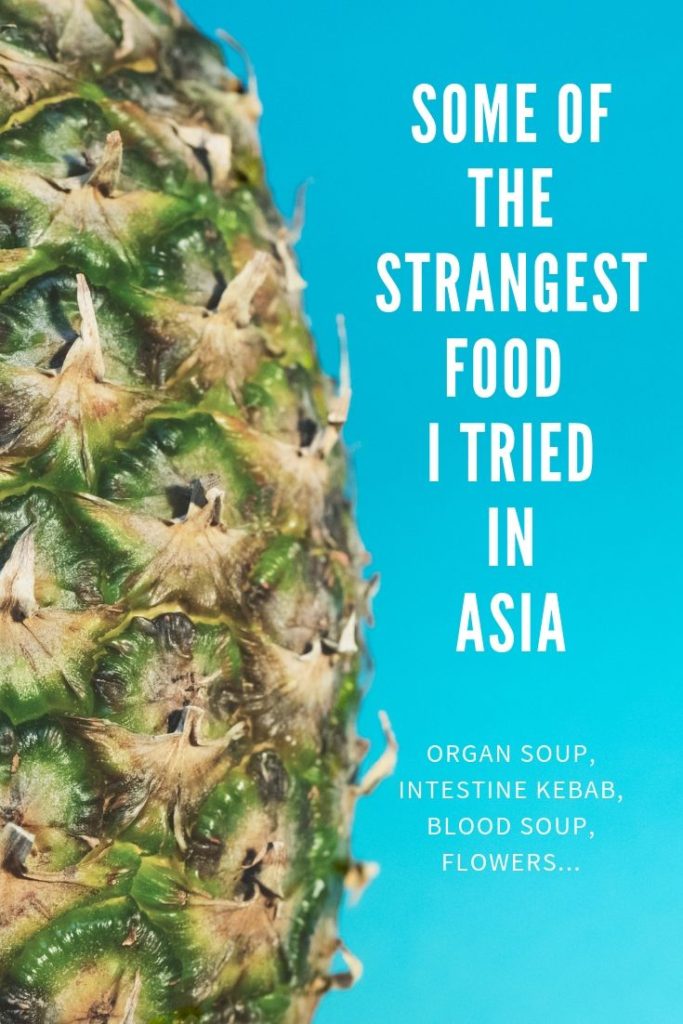