The Philippines is an amazing country with more than 7000 islands to choose from.  The beaches are amazing, the tribal culture and history impressive, and nature is rich in surprises. The Philippines is the only Asian country colonized by Spain, and the country definitively has a Latin touch. The people are mainly Roman Catholic, but the culture is a mix of Islamic, Malay, Spanish, and American influences.

Filipinos are happy people, they love celebrations and parties. You’ll probably be able to participate in one of the many fiestas or festivals that take place year-round all over the country.

Here is everything you need to know about planning your trip to the Philippines:

When to go to the Philippines

The best months to visit are from March to the beginning of May.

What to eat in the Philippines

The Philippines has a large variety of food to offer, such as barbecue, there’s also barbecue and of course, barbecue too, without forgetting the rice. You’ve been warned the Philippines is not a vegetarian-friendly country.

Being more serious, the Filipinos eat a lot of meat (mostly pork and chicken) and a lot of fish, sometimes mixed together in the same dish, yummy! Vegetables in eateries are hard to come by and are often mixed with meat or fish and usually swim in oil.

For vegetarians, your best option is to buy vegetables at the market and cook them yourself. You can also try asking at the eatery to cook something without meat or fish for you.

Eateries are local restaurants where they prepare the food in advance and lay it in a “buffet”. There’s no menu, you just choose what you want from the buffet. It’s usually really cheap and even if the food stays out all day, I’ve never gotten sick from it. Nicer restaurants (with a menu) are not always an option if you travel outside of cities and touristy places.

Among the Filipino traditional dishes are:

Where to go in the Philippines

With so many islands to choose from, planning your itinerary for the Philippines can be a headache, but getting around the country is pretty easy with many flights, buses, and boats between the islands.

In Palawan, a common itinerary would be to start in Puerto Princesa (Honda Bay and the underground river) and make your way to El Nido, up to Coron, if you have time. El Nido and Coron are both amazing for snorkeling, diving, and island hopping. The town of El Nido is not worth staying in, but you’ll find plenty of nice resorts around El Nido as well as hostels and backpackers close to the beach.

Palawan is famous for its pristine beaches and amazing rock formations. It’s really crowded but the landscape is just amazing like you won’t see anywhere else.

Cebu Province also attracts a lot of visitors, especially in Malapascua, Moalboal, and Bantayan, great for diving, and in Oslob, famous for whale-shark watching. Without forgetting the mysterious Siquijor, famous for its many faith healers.

Bohol is on most tourists’ itineraries as well,  The island is famous for its chocolate hills and tarsiers sanctuaries. The smaller island nearby, Tagbilaran, is known for its gorgeous beaches and party scene.

In Mindanao, the paradise-like Camiguin Island attracts more and more visitors each year, same as its neighbor Siargao, dubbed the surf capital of the Philippines. If you’re in Mindanao, don’t miss the enchanted river.

Fortunately, many destinations in the Philippines still stay untouched by tourism. The islands of Leyte, Samar, Romblon, and Panay barely see any foreign tourists. These islands have a lot to offer and are home to some of the most beautiful things you’ll see in the Philippines.

Leyte’s coast is sparkled with amazing islands such as Canigao or Biliran, its interior also offers beautiful scenery like in Danao lake.
Samar is great if you like caving, there you’ll find many caves great for spelunking. Off the coast, you’ll find amazing rock formations, like in Marabut or Biri (my favorite).

In Romblon check out Bonbon beach, a perfect deserted beach, like you only see in movies. Make sure to also visit nearby Sibuyan dubbed the Galapagos of Asia.

Panay is famous for Boracay, but most tourists don’t venture farther than the party island. Iloilo province has a lot to offer and is great if you like nature and picture-perfect beaches. Visit Panay’s hidden gem: Isla Gigantes, only known by locals, this cluster of islands is amazing.

Next to Panay is Guimaras, also only known by local tourists, the island is famous for its mangoes and is great if you like island hopping.

In Negros, you’ll also find many places overlooked by tourists. Bacolod and around offer a lot of activities and nearby Silay is really worth a stop. In Silay you’ll find many historical houses, restored and now open to the public. Going south, Kabankalan is famous for faith healers and is home to one of the Philippines’ most beautiful waterfalls. Nearby Sipalay is the perfect place to enjoy amazing beaches, even though it’s starting to get noticed by international tourists.

If you’re in Cebu and want to escape from the crowd, go to Camotes, this remote island has a lot to offer. Just rent a bike and explore. 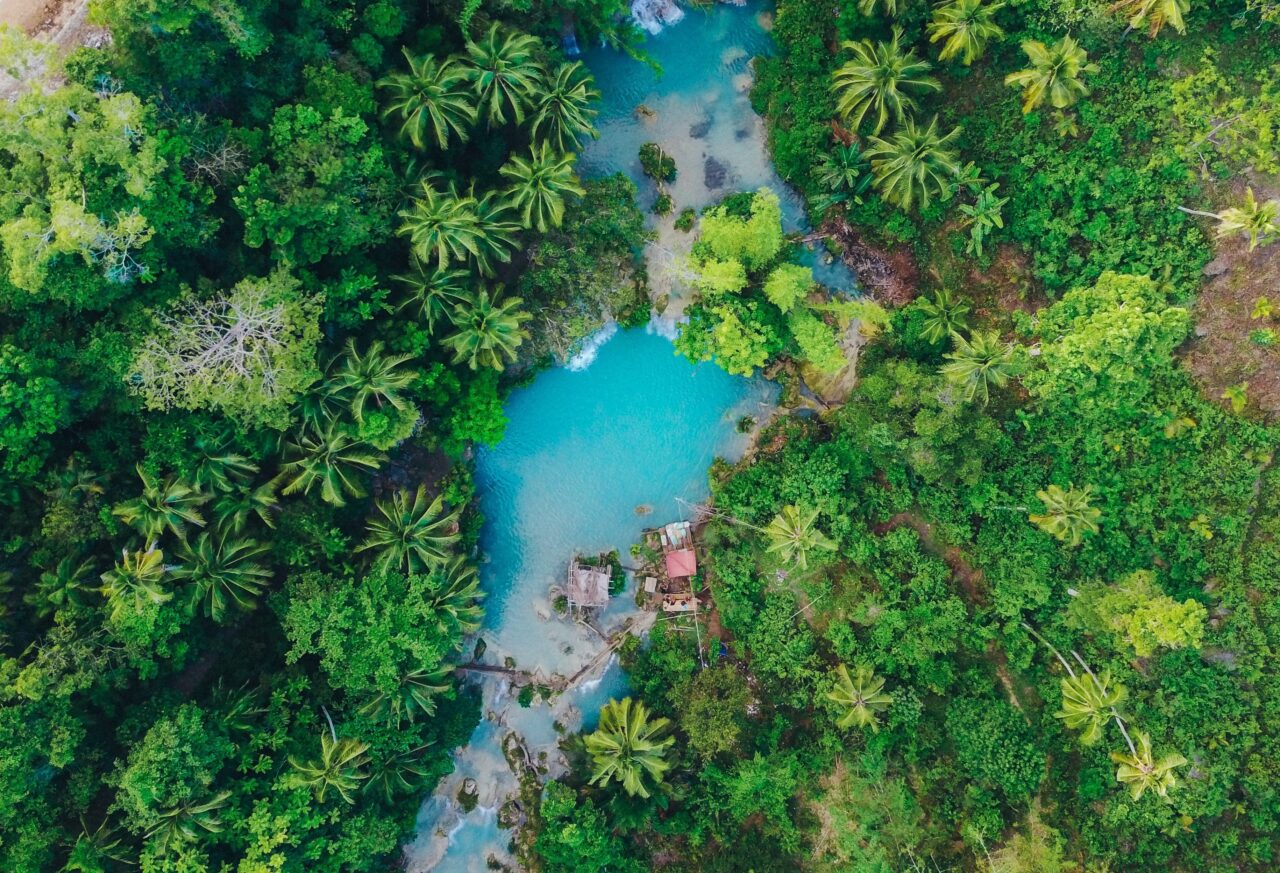 Where not to go in the Philippines

Unfortunately, not all of the Philippines is safe to visit. Tensions with Muslim separatists and the government still perdure and ISIS is still present in the country. In the past, there have been several foreigners kidnapped. But don’t worry most places are really safe.

You should avoid Mindanao, things are getting better with the government finally getting a hold of the Marawi situation but it’s still best to avoid the island if you’re a foreigner. The East part is ok though, places like Davao, the enchanted river, Camiguin, and Siargao are safe with many tourists going there. The west part could be ok if you’re traveling with locals and easily blend in.

Sulu is definitely a no-go. Officially the government has a stronghold over Sulu, most Filipinos doubt that and are pretty clueless about the situation there. Sulu is the state where ISIS is the most active. There are frequent kidnappings of locals going on there.

South of Cebu is unadvised by many countries because of kidnappings that took place a couple of years back. It’s now full of tourists and there haven’t been any kidnappings recently so I would say it’s ok to go there.

West of Palawan is also unadvised by many countries. There haven’t been any incidents in the last years and the situation seems to be under control. Many local tourists go there, but few foreigners. If you want to go, the best way to do it would be to join a group of Filipinos, just to be on the safe side.

Getting around in the Philippines

Tricycle: tricycles are the Filipino adaptation of tuk-tuks. They are mostly found in cities and are shared, there’s no itinerary, you just stop one (even if there are people in it), tell the driver where you want to go and if it’s on its way he’ll take you there. The first 3 kilometers are usually 8 pesos per person. You can also hire one for a special trip and then you’ll have to negotiate the price with the driver. In more remote islands they are also used to go from one town to another, the shared ones usually wait near the public market. You’ll have to wait for it to be full before it goes.

Jeepneys: jeepney is the perfect way of transportation if you like human contact because there’s always room in a jeepney, you’ll be impressed by how much stuff and people you can fit in there. Of course, you understand that it’s not for people who like comfort. For those you don’t mind, jeepneys are perfect to get around big cities or to get to the next town. Usually, jeepneys don’t do long distances, maybe 60 kilometers max.

Habal-Habal: habal-habal are moto-taxi that can accommodate about 4 to 5 people, good for short distances.

Bangka and Ro-Ro: boats are the easiest way to get from an island to another, the routes and schedules are numerous making it super practical. Bangkas are the traditional Filipino boats with bamboo on each side to balance the boat. Ro-Ro (roll on – roll off) are ferries but locals tend to call any big boats ro-ro.

Buses and vans: the best option for longer trips, it’s super easy to catch a bus or van on the main road or at the terminal. Unless in a really remote island, the schedule is frequent, with some lines running 24/7. Buses are cheaper but vans go faster. Not every island has vans, and some don’t have buses

Planes: there are airports almost everywhere in the Philippines, if you don’t have much time it’s the best way to get around. It’s better to book in advance as the prices usually triple during the last week.

Planning your budget for the Philippines

Food: In the eateries, you can eat for less than a dollar, in nicer restaurants the prices are usually around 5 USD. Fruits in season cost usually around 50 cents per kilo.

Drinks: Large beers are around 1 USD, cocktails 3 USD, and fruit juices between 1 and 2 USD. You can refill your water almost everywhere for free, even in eateries and restaurants, they often offer service water.

Accommodations: the price of a bed in a dorm usually varies between 5 USD to 10 USD, a budget double room cost around 6 to 20 USD, depending on the location. They all tend to fix the same prices as their competitors. If you’re on a budget, the cheapest accommodations won’t be online so you’ll have to ask around when you arrive at your destination.

Activities: prices for activities vary depending on where you are. Island hopping is from 20 USD to 100 USD for a small boat, joiner tours start at 10 USD and up. Renting a van for a day trip is around 100 USD and a tricycle between 20 to 40 USD. Entrance fees are usually really low, 5USD maximum and it’s for the most expensive ones.

Transportation: really cheap in the Philippines, in the cities you pay around 8 pesos for the first 3km in the jeepneys and shared tricycles. The municipality fixes the prices. Long-distance buses and boats are also super cheap, maximum 10USD unless you go really far. People usually don’t cheat you on the prices.